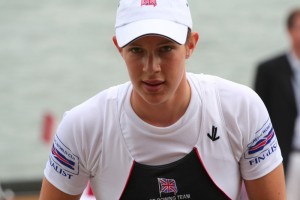 With nearly a decade at the top of Britain’s most successful Olympic sport, Annie has a proven track record in the cauldron of seven World Championships and two Olympic Games.

She became a World Champion for the first time in 2007 and this set the scene for an assault on the Beijing Olympics in 2008, where their crew of four attempted to be the first British women’s rowing team to become Olympic Champions. Leading until the final hundred metres of their final, they were overhauled by the Chinese crew to finish second. Their tears and grief on the podium were beamed by television cameras back to the UK and led to some tough questions when they returned – how can you be so dissatisfied and ungrateful with an Olympic silver medal?

The devastation of failing to achieve what the team were capable of forced Annie to re- examine her values, her goals, and her approach. She returned to elite sport for the London Olympiad with a newfound motivation of creating a perfect team performance.

Following Beijing, Annie put this to the test and after a narrow second place in the 2009 World Championships, all the pieces came together the following year when she was crowned World Champion for the second time with a stunning race in New Zealand. Following the 2010 victory, Annie became hit
by repeated illness and injury and at one point it was doubtful as to whether she would even go to the London 2012 Olympics; but she battled back to win a seat in the women’s eight, finishing fifth.

Annie always had a keen interest in how the brain works, and the factors underpinning success. She explored this interest in Mind Games: Determination, Doubt and Lucky Socks – the psychology of elite athletes which was published by Bloomsbury in 2019.

The book aims to show how elite athletes train their mental skills in exactly the same way that they train their physical skills. Nobody is born with the ability to run out at Twickenham in front of 80 000 people; or have rock-solid confidence; or be coached by someone with a very different personality to yourself. All these mental skills are learned.

The book debunks the myth that elite athletes are universally cool, calm and collected; it shows that everyone is uniquely different and approaches the psychology of their performance in a different way.

Annie is a confident and experienced communicator and can present her unique perspective in an engaging manner. She focuses on the areas where the skills required to reach the top in elite sport overlap with those required to succeed in business. From team work and maximizing the potential of those around you, to goal setting, resilience, change management, and delivering under pressure. She is able to share her experience of what makes teams tick and how to create a resilient and high performance culture at work; taking every setback as an opportunity to improve.

Her approach is based on the belief that our values and motivations determine how we perform in the workplace. Annie has presented to a number of City law firms and banks on issues around diversity and inclusion, and she is able to explore how working to change values and behaviours within a team can have a measurable impact on outcomes.

Annie Vernon in the Media:

Other Biographies of Annie Vernon from External Sources:


Warning: count(): Parameter must be an array or an object that implements Countable in /var/sites/a/annievernon.co.uk/public_html/wp-content/plugins/features-by-woothemes/classes/class-woothemes-widget-features.php on line 97

Warning: count(): Parameter must be an array or an object that implements Countable in /var/sites/a/annievernon.co.uk/public_html/wp-content/plugins/features-by-woothemes/classes/class-woothemes-widget-features.php on line 101

Warning: count(): Parameter must be an array or an object that implements Countable in /var/sites/a/annievernon.co.uk/public_html/wp-content/plugins/features-by-woothemes/classes/class-woothemes-widget-features.php on line 106

Warning: count(): Parameter must be an array or an object that implements Countable in /var/sites/a/annievernon.co.uk/public_html/wp-content/plugins/features-by-woothemes/classes/class-woothemes-widget-features.php on line 113

From 1-to-1 business coaching to large groups, Annie offers sessions to help individuals and teams maximise their potential.

Regular contributor to BBC Sport and other publications, Annie produces journalistic copy and essays for publications on rowing, elite sport and leadership.

Annie is an accomplished public speaker and is available for after-dinner speaking, business conferences, events and award ceremonies